Battle of the Ebro

La Battle of the Ebro was one of the bloodiest of the Civil War and the saccejà Terra Alta causing long-term consequences. Most were bombarded villages in the region, almost uninhabited because everyone had fled to live in houses or rear. The bombing of Corbera Ebro was very intense and destroyed the village, the corberans decided to rebuild it a few feet beyond. This allows us to walk us to a village in ruins and thrill us imagine what it means war. In addition, were installed several works of art under the title ABC of Liberty arouse certain thoughts.

The Corbera d'Ebre mateix, podeu visit the Centre d’Interpretation 115 Day of Battle (C1 to map) of Comebe, which gives an overview of how they lived 115 battle to the front. This information center is so interesting to people in the battle especialiste, seeking to confront informació, as for those who want to get an idea of ​​what it meant. Spread the peoples of the region are other schools of interpretation that can complement the visit according to your interests: 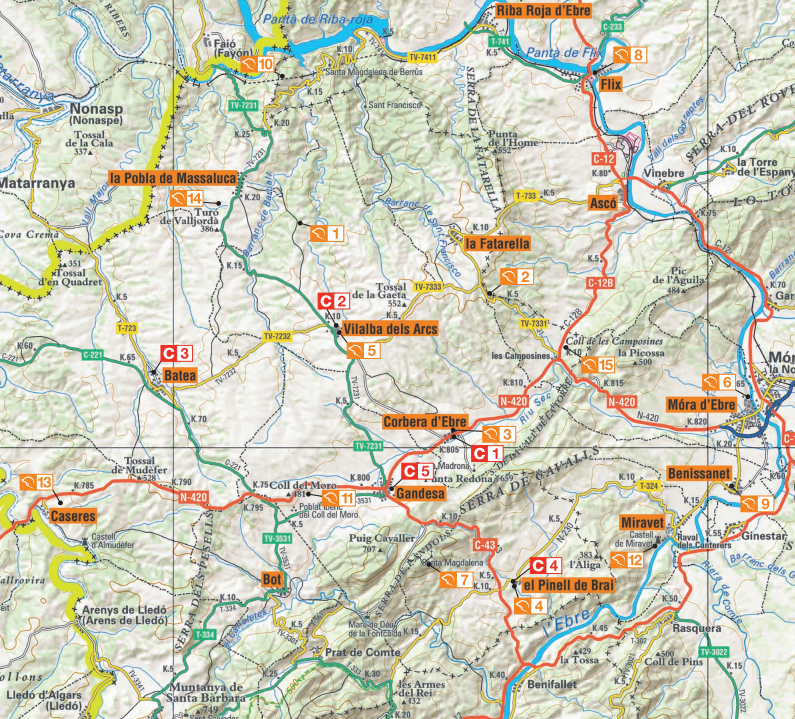 D'Altra banda, some of the infrastructure built for war such as trenches, shelters or campanents been rehabilitated and signaled to be viewed. The COMEBE organizes guided tours to these places some specific days. In addition, You can book your route with 4×4 spaces for dela Batallade Ebro with private enterprise Rutes Borrell.

The ranges where it took place much of the battle are Pàndols and Horses, strongly steep mountains with little shade and little water that made even those hard summer. The route of Pau tries to get closer to these areas based on Fonteta Gandesa, passing per la cota 705 Pinell Fontcalda visitor and to return to the starting point.