Old Station Bot, Greenway currently train on the left and the right people

The village of ., one kilometer which is located Alta's Campsite, is in a strategic location in relation to the Greenway as it is one of the few places where the people are voreta season of the old railway line and therefore the Greenway. So, Greenway users can fill the bottle to the source station Bot, if they have any other need can stop by the shops and bars of the town, plus bar and restaurant Camping Terra Alta and finally, if you have a breakdown can fix it themselves in of the autotaller bicicletes Camping in the Terra Alta. Bot is right in the middle of the Greenway miles 60 of 96 which has among Alcanyís hi i Tortosa.

La Via Verda Terra Alta part of a longer route that connects with Alcaniz Tortosa. This is an old railway with a history closely linked to the realities of December two territories brothers Lower Aragon and Catalonia Southern. Cliqueu aquí to learn more about this story. 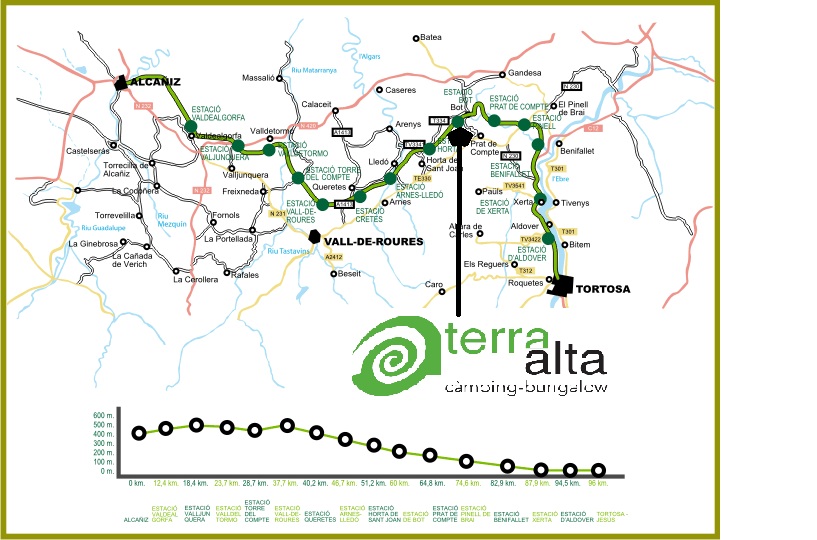 La Via Verda Terra Alta Walking 24 km between stations and Moths Pinell de Brai and Camping Terra Alta is located at km 13 the route. Most users of these moves Camping 12 kilometers up or down the Greenway as it contains very varied landscapes in short. It is quiet fascinating and little effort with this section of greenway us to the River Valley and inside a Canaletes saws, that geologically part of Ports. The design of this section is that the differences are saved in a very quiet resort with the usual tunnels making this stretch is known as the Greenway Tunnel. Some of the tunnels is not sufficiently illuminated, you just have to have it in mind and be prepared with flashlights to be seduced by the silence that is inside the mountains.

For families with children This stretch is great because you can make short trips around the campsite with the tranquility that gives this way without motorized traffic. In addition, proximity to Fontcalda enables a short hike we will take bath and a beer, sigui tot dit. Camping is the ideal situation because it does not have to go by car to the starting point of the excursion, but from the camp and through a dirt road about 50m plant in Greenway us to decide if we throw up or down.

Com deiem, The route runs between Tortosa and Alcaniz a 96 km, but administratively understood as three different Greenways. This division makes the search for information when planning a trip that covers the whole route, for això, Interestingly, we visit the official website of the various greenways:

In the same way, The stories are very common and opinions expressed by users of greenways trying to explain their experiences and suggestions:

Weekend hiking in from Alcaniz in Tortosa